The Chickenpox won't hurt my children, so they don’t need to be vaccinated.

Prior to 1995, when the Varicella (Chickenpox) vaccine was licensed, the disease resulted in 11,000 hospitalizations and 100 deaths annually. Today, the Centers for Disease Control and Prevention reports that Varicella is the greatest vaccine-preventable killer of U.S. children. Also, children protected from chickenpox are also protected from painful outbreaks of shingles as adults.

Chickenpox Vaccine - What You Need To Know 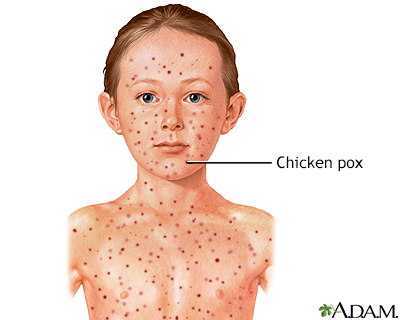 *All content below is taken in its entirety from the CDC Chickenpox Vaccine Information Statement (VIS): www.cdc.gov/vaccines/hcp/vis/vis-statements/varicella.html

Chickenpox (also called varicella) is a common childhood disease. It is usually mild, but it can be serious, especially in young infants and adults.

Most people who get chickenpox vaccine will not get chickenpox. But if someone who has been vaccinated does get chickenpox, it is usually very mild. They will have fewer blisters, are less likely to have a fever, and will recover faster.

Who Should Get Chickenpox Vaccine And Shen?

Children who have never had chickenpox should get 2 doses of chickenpox vaccine at these ages:

People 13 years of age and older (who have never had chickenpox or received chickenpox vaccine) should get two doses at least 28 days apart.

Anyone who is not fully vaccinated, and never had chickenpox, should receive one or two doses of chickenpox vaccine. The timing of these doses depends on the person's age. Ask your doctor.

Chickenpox vaccine may be given at the same time as other vaccines.

Note: A "combination" vaccine called MMRV, which contains both chickenpox and MMR vaccines, may be given instead of the two individual vaccines to people 12 years of age and younger.

Some People Should Not Get Chickenpox Vaccine Or Should Wait.

Ask your doctor for more information.

What Are The Risks From Chickenpox Vaccine?

A vaccine, like any medicine, is capable of causing serious problems, such as severe allergic reactions. The risk of chickenpox vaccine causing serious harm, or death, is extremely small.

Other serious problems, including severe brain reactions and low blood count, have been reported after chickenpox vaccination. These happen so rarely experts cannot tell whether they are caused by the vaccine or not. If they are, it is extremely rare.

Seizures caused by a fever are also reported more often after MMRV. These usually occur 5 to 12 days after the first dose.

What If There Is A Serious Reaction?

What should I look for?

Signs of a severe allergic reaction can include hives, swelling of the face and throat, difficulty breathing, a fast heartbeat, dizziness, and weakness. These would start a few minutes to a few hours after the vaccination.

What should I do?

VAERS is only for reporting reactions. They do not give medical advice.