Respiratory illnesses are common during this time of year, and one particular virus is causing serious problems in the Owensboro area.

Better known as RSV, Respiratory syncytial virus (pronounced “sin-si-she-all”) is a common illness in the winter months. For adults and older, healthy children RSV behaves like a common cold. For babies and those with weakened immune systems or pre-existing heart or lung problems, RSV can be dangerous or even deadly. That’s why parents need to know about this illness and take precautions to protect their little ones. 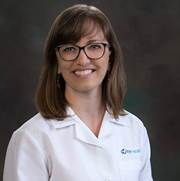 RSV is a common respiratory virus that nearly everyone has had at least once by the age of 2, according to the Centers for Disease Control and Prevention. It’s spread the following ways:

People with the virus are contagious for up to eight days. Infants and those with immune problems can spread the disease for up to a month.

In the past few weeks, RSV has become a major concern in this area, and we’ve seen many children with this illness at Owensboro Health Regional Hospital and our local pediatric practices. As a pediatric hospitalist, I take a cautious approach. If I’m worried that a child will have trouble breathing on their own, I sometimes transfer them to a specialized children’s hospital. I would rather they be at one of these facilities, which are better equipped for handling the most severe complications before their symptoms reach dangerous levels. However, we can help here at OHRH too, by providing intravenous fluids, oxygen and close monitoring for worsening of symptoms.

Symptoms of RSV usually develop between four and six days after becoming infected. The illness itself lasts about a week, with the worst symptoms around day four or five. The symptoms of RSV include:

RSV is dangerous in adults with weak immune systems and small children, especially those under three months old, because of the risk of inflammation and swelling of the medium-sized airways of the lungs. This condition, called bronchiolitis (pronounced bron-key-oh-lie-tis), can make it difficult for the child to breathe. Over time and without assistance, the child can become so exhausted that they go into respiratory distress and can no longer breathe on their own. To get through the illness, these children may need a ventilator or other type of assistive device to continue breathing. However, we do our best to prevent this by intervening early and providing support.

What Can Parents Do

Because RSV is a virus, antibiotics have no effect, and it must run its course. All we can do is try to prevent the disease or treat the symptoms for those who have it.

Here’s what parents can do to prevent this illness:

If your child has cold symptoms or is diagnosed with RSV, the American Academy of Pediatrics recommends the following:

If your child has any of the following symptoms, seek immediate emergency care at a hospital emergency department:

If you have any questions about this illness, reach out to your regular pediatrician. We all want to make sure your baby gets well and stays well.