Owensboro Health CEO, CFO to step down simultaneously next February 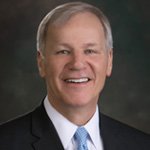 OWENSBORO, Ky (Aug. 13, 2020) - Owensboro Health President & Chief Executive Officer Greg Strahan and Chief Financial Officer John Hackbarth have announced plans to retire simultaneously, effective Feb. 1, 2021. The system’s board of directors will form a transition committee that will search for the organization’s next president in the months ahead.

Strahan became CEO on Aug. 23, 2016 after serving in the role as an interim for four months. Prior to becoming Owensboro Health’s CEO, he served for nine years as the system’s chief operating officer and oversaw the construction of the new Owensboro Health Regional Hospital, which opened in 2013. He also served for two years as vice-president of business development and community health services, arriving from North Mississippi Health Services in 2005.

“I am forever grateful to have been part of the Owensboro Health story,” Strahan said. “It is simply amazing to reflect on everything that we have accomplished as an organization over the past decade. The credit belongs to our team members, providers and volunteers who carry out our mission every day. Owensboro Health truly is a special place, and I am proud to be part of it.”

Hackbarth has served as the system’s CFO since March 2008 and led the effort to finance the $350-million construction of Owensboro Health Regional Hospital. Under his leadership, the system recently achieved positive financial ratings from two major bond agencies and recently surpassed 200 days of cash-on-hand. Hackbarth served at health systems in Oklahoma and Mississippi before coming to Owensboro Health.

“It is extremely gratifying to have been part of Owensboro Health’s success,” Hackbarth said. “We have built an incredible team of 4,300 team members, and it is our honor to help shape the health and economy of this region.”

Together, Strahan and Hackbarth have presided over an era that saw Owensboro Health emerge as a regional health system and achieve national benchmarks for quality and financial performance. Since 2015, the system has added a second hospital, Owensboro Health Muhlenberg Community Hospital, and constructed three outpatient complexes in Henderson, Madisonville and Powderly. A third hospital, Twin Lakes Regional Medical Center, is expected to join Owensboro Health later this fall. Other accomplishments during the executives’ tenures include: the launch of the a new electronic medical record system (Epic); the growth of Owensboro Health Medical Group from 19 providers to over 200; the renovation of the former hospital site on Parrish Avenue; the creation of a regional pandemic surge plan involving multiple hospitals and agencies; and five years as a Healthgrades “Top 5%” hospital.  The system has also managed to keep all 4,300 team members fully employed during the COVID-19 pandemic.

“Greg and John have built a strong foundation that will allow Owensboro Health to continue accomplishing big things for our region’s health and economy for many years to come,” said Jeff Carpenter, chairman of the Owensboro Health Board of Directors. “Their visionary leadership and commitment to financial health have set the stage for more growth and development in the future.”

Carpenter will chair the board’s transition committee that will search for the next CEO— a process that is expected to take at least six months. Regular communication with team members, providers and the community, he said, will be an important part of the search process.