Austin, an amateur musician who sometimes jams at the Bluegrass Music Hall of Fame and Museum, volunteered to help launch the club’s new program — Harmonicas for Health.

“I play (the harmonica) because it’s fun and good for you,” Austin told the crowd. “We’re here so you can figure out a way to practice breathing.” 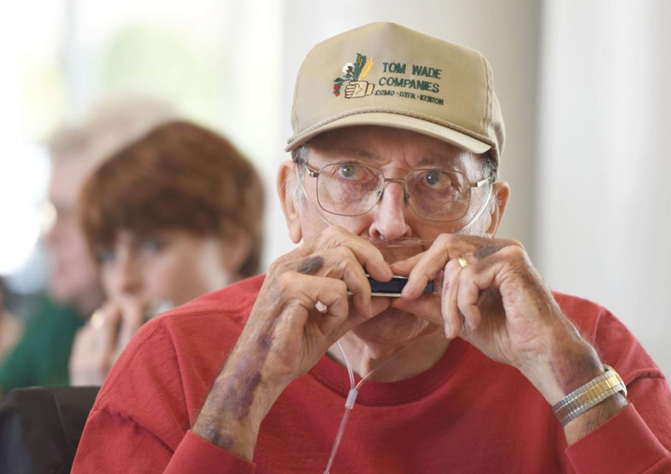 In May 2019, OH started the Better Breather’s Club, a support group for people who suffer from chronic lung diseases. With an average of about 40 participants each month, the local group is the largest in Kentucky, said Sara Abell, manager of OH Regional Hospital’s Heart and Lung Rehabilitation.

The state ranks second nationwide for chronic obstructive pulmonary disease, or COPD. More than 11% of Kentucky adults share that diagnosis, according to OH officials.

Late last year, the health system’s Better Breather’s Club received a gift of 40 harmonicas. Abell watched a YouTube video and taught herself to play “Jingle Bells.” Then, she taught the club’s participants.

“As soon as you get the harmonicas out, they are like little kids,” she said.

Thanks to a grant from OH Foundation, the Better Breather’s Club has purchased 400 Jambone harmonicas for club participants and pulmonary patients who are treated at Heart and Lung Rehabilitation. Each person who participates in Harmonicas for Health receives an instrument free — as long as supplies last.

“We wanted to foster a fun way to encourage deep breathing and increase their lung capacity,” Abell said.