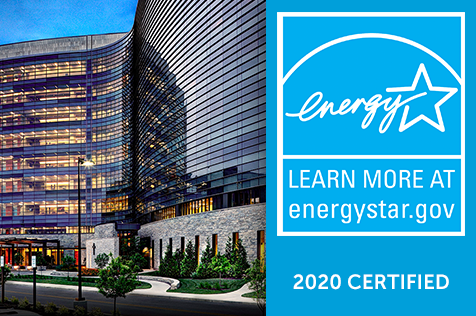 ENERGY STAR certified buildings and plants are verified to perform in the top 25 percent of buildings nationwide. Buildings are scored on a 1-100 scale that compares a building’s energy efficiency and performance to industry standards. The Energy Star designation is good for one year only and facilities must reapply annually and demonstrate that they are continuing to meet the necessary criteria. This year, OHRH received a score of 77, up from an already impressive 75 in 2019.

“We’re honored to earn the ENERGY STAR certification again at Owensboro Health and appreciate the efforts of our Facilities Team to keep us efficient,” Owensboro Health President and CEO Greg Strahan said. “Saving energy is just one of the ways we show our community we care, and that we’re committed to doing our part to protect the environment and public health, both today and for future generations.”

Owensboro Health’s energy efficiency efforts began in 2014 when the system partnered with Harshaw Trane, a Louisville-based energy engineering and consulting company. Harshaw Trane’s analytics and monitoring tools helped Owensboro Health target areas where energy efficiency could be improved and the system began acting on what was learned. Some of the efforts that have resulted in big energy consumption reductions include:

OHRH is one of only two hospitals in Kentucky to earn the Energy Star designation for 2020, the other being Norton Audubon Hospital in Louisville. Just nine Kentucky hospitals have ever earned the designation, and OHRH remains the only one in Western Kentucky.