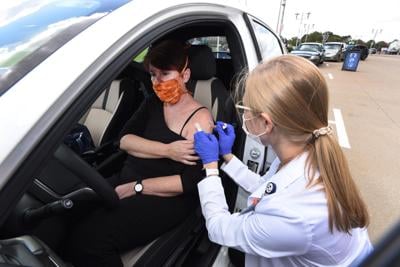 Carla Newton gets a flu shot from Owensboro Health’s Deidre Ledbetter, pharmacy resident, during a drive-thru flu shot clinic on Thursday in front of the Owensboro Convention Center. The event was open to the public and no appointments were needed to get the flu shot.

There was little downtime for the Owensboro Health pharmacists who were administering flu shots Thursday at the drive-thru clinic set up outside the Owensboro Convention Center.

Two OH pharmacy teams — the first shift from 9 a.m. to noon and the second shift from noon to 3 p.m. — manned the clinic along with help from OH’s marketing staff.

Lisa Young, an OH pharmacist, said they were prepared for 200 doses with about 70 distributed before lunchtime.

“I honestly believe we’ve had more interest this year than in the past,” said Young about flu shots in general. “We’ve already done more in the outpatient pharmacy this year than we did at this time last year.”

The higher flu shot interest is being attributed to COVID-19 and the attention it has brought to viruses.

Although a vaccine is still being developed for COVID-19, health officials highly recommend being vaccinated for the flu to prevent its spread. The seasonal flu usually starts to rise in October and peaks between December and February.

According to the CDC, anyone 6 months and older should be vaccinated with a flu shot.

Deidre Ledbetter, a 24-year-old OH pharmacy resident, said she was required to take a flu shot while in pharmacy school, but she had taken one for years even before then.

However, Ledbetter said it’s common for people to think they don’t need a flu shot or that they should wait until they’re much older before they’re vaccinated.

By 12:30 p.m., the traffic was steadily flowing through the outdoor clinic.