Healthy For The Holidays: Healthpark Gearing Up For Diabetes Prevention Program 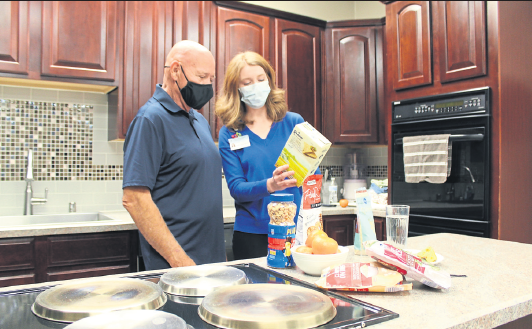 The Owensboro Health Healthpark is set to start up a new class for its Diabetes Prevention Program, which helps teach-diabetic individuals healthy behaviors and eating habits to help prevent their progression into type II diabetes.

The class is instructed by Shelby Shelby, Healthpark diabetes educator and prevention program leader. It hosts about12 to 15 participants at one time who meet weekly for the first several weeks of the class to discuss different topics related to diabetes, whether it be nutrition, exercise, behavioral changes, dealing with holidays and other gatherings that might involve unhealthy foods.

Following the first several weeks, the class will meet bi-weekly, then monthly, then quarterly for a year.

“Our entire goal is to help prevent the development of type II diabetes, so it’s for patients who have pre-diabetes who are at a higher risk of getting type II and we teach them how to eat well, exercise and other things that you can do for your health, such as good sleeping habits, stress management,” Shelby said.

Anyone is welcome to register for classes, whether it is a doctor referral or a self-referral. The classes are also covered by Medicare for eligible beneficiaries.

Those who do not have Medicare or are unable to get the class covered by insurance may receive financial assistance from the Healthpark, which is funded by grant money.

“We don’t turn away anyone,” she said.

The class, she said, is all research-based with a curriculum developed by the U.S. Centers for Disease Control and Prevention.

The next class is set to start on Nov. 1, right in time to learn some useful strategies and healthy habits for the holidays, according to Shelby.

Joe Mills, a participant in the class, said he lost 60 pounds since beginning the program in February, 2020.

“I was diagnosed as prediabetic and I’ve got two brothers with diabetes and two brother-in-laws and I see what they go through and I thought, ‘I’m going to have to do something about this,’ ” he said. “My heart doctor told me, as far as my blood pressure, he’d done about all he could for me, so I said ‘it’s time to do something.’ The program really helped me.”

He said the program has been really beneficial to him in helping him learn how to work on portion control and learn health recipes and strategies to use to avoid unhealthy foods.

He said the group setting is also helpful to trade healthy recipes with other participants and encouraging each other to stay on track, even after a lapse.

“You just have to stick to it. You can’t beat yourself up over just one mistake or two mistakes; you’ve got to get back on track,” he said.

Mills said he learned some useful strategies for events and gatherings that might be serving up unhealthy or large portions of food, which is typically common during the holidays.

The trick, he said, is to make sure to eat meals regularly throughout the day rather than wait until the event to eat, as many like to do.

“If you’re going to something like that, maybe eat a little something before you go that’s not fattening so you’re not starving when you get there,” he said.

Those strategies to implement healthier habits, all around, are what is discussed and taught through the DiabetesPrevention Program, according to Shelby.

Even after the program ends, Shelby said she still tries to be available for participants to reach out to or connect with ifthey need additional help.

The Healthpark will host an informational session regarding the Diabetes Prevention Program on Monday, Oct. 25, at 5 p.m. in Classroom B, which is open to anyone who wants to participate.

Anyone who wants to register for the upcoming program beginning Nov. 1 will have the opportunity to do so at the end of the informational session.

“We want everyone to be involved that can be,” she said.