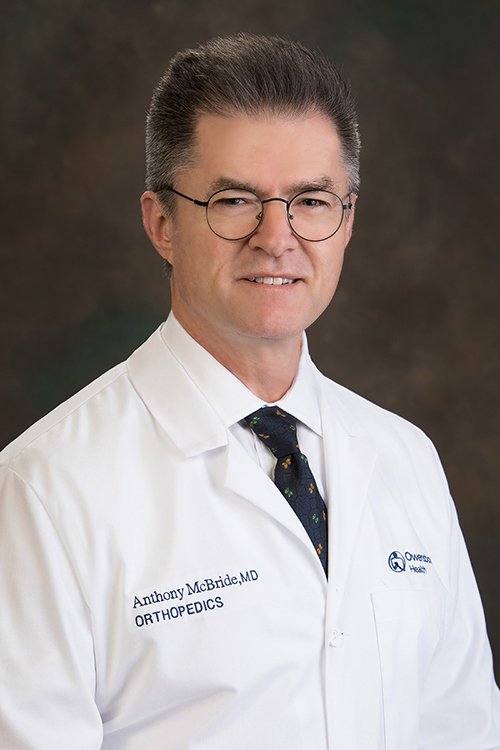 “My mother was a nurse and she knew I was interested in science so she directed me to going into medicine. That’s why I guess I chose it, the family interest,” McBride said. “I became interested in orthopedics after I completed medical school and did a rotation in orthopedics. I worked in construction in my high school and college years and orthopedics was a lot like construction work. It’s very hands-on and you can actually fix things and do things, and I like that.”

“When they approached me about taking a job here, I was interested in changing locations but I didn’t really know where I wanted to go. When I learned they were building a new hospital and wanted to start an orthopedic program at the hospital, that’s what primarily got my interest. After I interviewed and met the people here, it just seemed like a good fit,” McBride said. “I like what I do. It’s fun, it’s enjoyable. People have a problem and we try to find out what it is and try to fix it.”

McBride also helped pioneer the use of the direct anterior hip and reverse shoulder joint replacement methods at Owensboro Health.

“That’s another reason I was interested in coming here. Nobody offered those things (the new surgical procedures) and that was something I could offer,” McBride said. “I like the whole thing, I like working with kids as much as I do adults. I really think of myself as a general orthopedic surgeon. I don’t want to be specialized in one thing. If that’s all I did, it would get boring and I don’t want to have a routine job.”

McBride also has a family, with grown children, and he also enjoys fishing, hunting and firearms, when he has the time.

“I have a wife and  three children. My oldest son is a dermatology resident in Florida and my daughter is about to graduate law school from Louisville. I have one daughter that’s about to graduate high school,” McBride said. “We like to go to movies and go to dinner. We’ll catch plays when we can, when we have time. We like to travel and visit my kids in Florida and Louisville. We have family vacations where we like to ski. There’s not one thing that I just do all the time. I like a lot of different stuff.”

McBride said he also works to treat all of his patients like they’re part of his family.

“I try to look at every patient’s problem as if they were a family member. I’ve had surgery myself and I know what it’s like to be on that end of it,” McBride said. “I try to think of it as if it were my father I were taking care of, how would I want to do it?”

American Board of Orthopedic Surgery

Read this message that was sent to Dr. McBride on National Doctors' Day.

"I will never forget you rushing to the emergency room on a Friday night to come to my aide. Having cut two of my fingers nearly off with a table saw, I sat in the ER with instructions to transfer to Louisville. You being off and not taking call were consoled and within minutes you were standing in the ER reviewing my X-ray images. I’ll never forget your response, "I can’t make you any promises but I’ll do everything I can to save them, I’m taking you into surgery now." You are not only an amazing surgeon, but you are a wonderful person. Your selflessness and dedication to your patients truly impacts lives. Thank you for making a positive impact on my life!!!" - Bill