Portion Sizes Can Be Deceptive 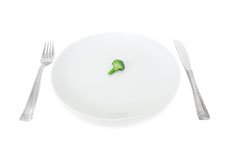 It is no secret that as food portions have grown over the past 20 years, so have the waistlines of Americans. How much do these increased portion sizes really affect how much we eat? The answer may surprise you.

Portions Larger Than You Think

Portion sizes and serving sizes are different today which greatly impacts our calorie consumption. A serving is a standard measure, such as a cup, a half cup, an ounce, etc. Portion size, on the other hand, is the amount of food offered to a person at a restaurant, in a package, or the amount someone chooses to put on their plate.

Muffins and bagels are perfect examples of portion discrepancies. Many times these foods are sold in sizes that constitute more than one serving.  We eat the entire thing, thinking it was a serving, when in reality the portion may be as many as four or five servings. YIKES!

Portion sizes may not matter if a person chooses to eat only a serving rather than the entire portion they are served, or if individuals eat fewer calories at subsequent meals or snacks to balance overall calorie intake. However, this isn’t often the case.

Large Servings Are Hard to Resist

Studies show that people do not intuitively assess appropriate serving 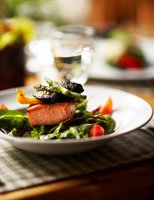 sizes, they don’t consume the proper serving size when a larger portion is offered, and they fail to adjust their calorie intake later in the day to balance out daily calories once they have consumed larger portions.

A study¹ tested how adults responded to different portion sizes of macaroni and cheese on four different days. They found that the more these adults were served, the more they ate. In fact, they consumed about 162 more calories when offered the largest portion compared to the smallest portion.

Studies done on children have yielded similar results. One in particular³ measured children’s bite size and intake of an entrée. Intake rose by 25% with the larger portions than with age-appropriate or self-selected portions.

Taking Control of Your Portions

Knowing this, it is essential that we become more aware of how portion size can impact our intake and develop strategies to avoid common portion pitfalls.