Get Your Diet Ironed Out 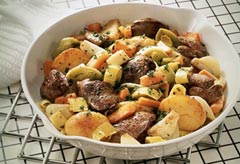 I just got a letter in the mail reminding me that it was time to donate blood. The need is especially high, the letter said, during the holiday season and cold winter months.

I always feel good after donating blood and plan to get over to the blood bank and donate sometime this month. If you are able, consider doing so yourself. This is a perfect time and January is National Blood Donor Month.

I am glad I am able to donate now because there was a time not too long ago that I was denied the opportunity because my iron level was too low.

Iron deficiency, which can result from too little iron in the body, is the most common nutrient deficiency in the United States and the world affecting over 1 billion people worldwide.

While you have probably heard of the different types of anemia such as sickle cell anemia, pernicious anemia and even anemia of chronic disease, iron deficiency anemia is the most common.

The importance of pumping iron

Iron is a mineral that plays a number of important roles in our bodies. Its main purpose is to carry oxygen, as part of the protein hemoglobin, from our lungs to the cells in our body so that they may produce energy. Iron is also a part of certain enzymes used for cell functions, it helps remove carbon dioxide from body tissues and plays a role in immune function.

Iron deficiency can have many causes. Sometimes a deficiency develops simply when an individual has increased iron needs. This may be the case during rapid growth (infants and toddlers), in pregnancy and during periods of blood loss (menstrual loss and certain stomach and intestinal conditions).

Deficiency may also occur in cases of decreased iron intake or absorption. Antacids above the recommended dose and some medications can also reduce the amount of iron absorbed by the body.

Additionally, the absorption of iron by the body can be greatly affected by the types of food that are eaten.

The iron that is found in food exists as two types, and hon-heme. The heme iron is typically absorbed two-three times more efficiently than non-heme iron.

Heme iron is found only in animals. Beef, poultry, pork, liver, lamb, and shellfish are all sources of heme iron. Clams, and liver are especially good sources of iron.

Foods that contain Vitamin C can enhance the absorption of non-heme iron when eaten at the same meal. Some examples of vitamin C rich foods include orange, tomato and vegetable juices, tomatoes, kiwi, strawberries and green and red bell peppers.

On the other hand, substances in tea, coffee, dairy products and some vegetables and whole grains can reduce the absorption of non-heme iron.

The bottom line: To prevent an iron deficiency, eat a healthful diet that includes many good sources of iron. This means eating a variety of animal and plant foods to include fruits, vegetables, whole grains, dried beans, low fat or dairy products, fish, lean meats, and seeds. Additionally, it never hurts to include a good source of vitamin C with your meals.

How much iron do we need?

*This value is an Adequate Intake (AI) value, which is used when there is not enough information known to set and RDA