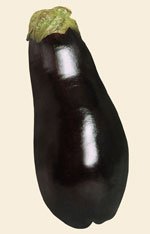 believed that eating them would make people go crazy. It is technically a berry. What is it?

If you guessed eggplant you are right! Botanically they are classified as berries and they are a member of the nightshade family making them related to potatoes, peppers and tomatoes. It is believed that Thomas Jefferson brought the first eggplants to the United States and that he experimented with many varieties in his Virginia garden.

Eggplant is very well-liked in Mediterranean regions and Asia, but it is not as popular in the U.S., possibly because many Americans don’t know how to prepare eggplant. We are missing out though on a healthy, versatile and tasty food.

The eggplant adapts well to a variety of cuisines because it absorbs the flavors that are added to it. Eggplant is delicious roasted, grilled, stuffed, sautéed, or marinated, plus eggplant makes a great addition to stir-fry dishes, pasta, soups, and casseroles.

The nutritional benefits of eggplant present yet another reason to try it.  A half-cup serving of cooked eggplant contains only 13 calories and 1.2 grams of fiber. Eggplant contains two valuable phytochemicals, terpenes and flavonoids, which are plant compounds that fight diseases. Terpenes can help lower cholesterol and may play a role in the prevention of certain types of cancer. Flavonoids may help lower a person’s risk of heart disease and stroke. You must eat the skin though to gain these health benefits.

Eggplant preparation is easy. Wash it, slice it or dice it and toss it into all 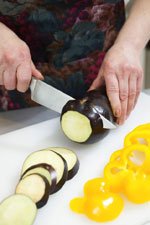 sorts of dishes. It adds body and a meaty texture to casseroles. Cut the eggplant as close to cooking time as possible to reduce the amount of browning. Leaving the skin on will allow it to retain its shape, color and nutritional value.

Some people like to salt their eggplant before cooking it as this may reduce some of the bitterness and make it less soggy. If you want to try this, sprinkle cut or sliced pieces of eggplant with salt, about half a teaspoon for a standard eggplant. Drain the salted pieces in a colander for 30-60 minutes, then rinse well. Press out any excess liquid with a clean, dry kitchen towel. The sodium content will not be increased with careful rinsing. Very fresh and smaller eggplants may not need salting to prevent bitterness.

So the next time you see eggplant at the store or the Farmer’s Market, pick up a couple and give them a try. Try a recipe for an eggplant dip.

Preheat oven to 425°. Place whole eggplant and garlic cloves on a rimmed baking sheet and rub with 1-2 TBSP olive oil. Roast until garlic is soft and golden, 15-20 minutes. Remove garlic and set aside. Continue to roast eggplant until soft and deflated, about 20 more minutes. Let cool for 20 minutes. Slice eggplant in half and scrape flesh into a bowl of food processor. Peel garlic and add to the bowl along with lemon juice, tahini, salt and remaining olive oil. Process until smooth. Refrigerate. Sprinkle with paprika before serving if desired.